Monday was my final day with 247Sports/CBS Sports as a national college football reporter. I’m again a free agent.

If that’s new news to you, you’re likely responding in one of three ways:

2. “Man, that was quick. How long were you even there?” (Answer: since November.)

3. “I didn’t even know you were at 247.” (An aside: A SportsCenter anchor whom I know and like sent me a Twitter DM last week to ask if I still worked at ESPN. I had to tell him I was part of an earlier, smaller purge. There’s a lot to keep up with these days, unfortunately.)

So, yeah, it was a short stay at 247. I thought I’d be there for many, many years, as I wrote upon starting the job.

I was stunned and deeply disappointed by the company’s decision in March to abandon its national college football coverage, which had been an area of expansion in recent months. But that’s 247’s prerogative, and I’m genuinely thankful for the opportunity.

I wish the absolute best to everyone in the office in suburban Nashville. It’s a particularly special bond that the 247 in-house employees share; that’s evident from the second you walk in the door. I’m grateful that I was able to be a part of it, even for a little while, and for the new friendships made during that time.

I’m not entirely sure what’s next, and that’s not the worst thing.

I have some time and I’m looking forward to exploring what’s out there, even if it isn’t in the conventional sports media world in which I’ve dwelled for so long. It seems that world is rapidly changing, anyway.

I’d never lost a job in my entire life, and now I’ve lost two in the past nine months. My story has sadly become fairly common; my heart has ached for my friends at ESPN, SI and other shops who have recently joined this growing club, one that can be defined by pain, doubt and confusion. The industry is simply no longer what it was when I entered it about 15 years ago.

But that’s OK, too. The past few months have shaken me in a profound way that has caused me to think very differently about my entire life – including my professional life. I want to tell people’s stories, just as I did when I chose this career. Maybe it’s through sports writing, maybe it’s not. There are still plenty of ways to tell stories; it just requires more versatility and adaptability than ever before.

I want to open myself up to all sorts of things that I would never have considered as I worked up a ladder that ultimately led to ESPN and CBS/247. As I look back, everything was so formulaic. It was all linear, with ESPN (or something like it) at the end.

Despite this season of adversity, I’ve enjoyed more good days than bad days. I’ve engaged in more self-reflection and received more motivation than if life continued in the status quo; I’ll use all this and be a better son, friend and human – and eventually, I hope, husband and father.

I guess sometimes you have to lose something – or some things – to find yourself, or at least to find a better version of yourself. I never expected to be in this position, but I’m fully at peace knowing that I’m exactly in the time and place meant for me. And I’ll run with my arms wide open toward the next opportunity.

There’s nothing about losing a job (or two) that can steal my joy and my belief that I’m moving toward a truer calling and a deeper sense of purpose.

As I said at the close of my ESPN tenure, the only thing I know is that I am not leaving Nashville. With each passing day, week and month, this city is entrenching itself as the home I was always meant to find. Being here truly fills me with hope. I’m fueled by so many uniquely inspiring encounters and adventures in this creative community.

I’ve known since I visited as a kid that it was a special, special place, and I cannot imagine letting go of that in the pursuit of a job.

If there’s anything I’ve learned since last summer, it’s that there’s no substitute for quality of life. For the longest time, I didn’t get that. I had it backward. I too often made ESPN the center of my existence, the planet around which everything spun. And that ultimately let me down. I want to rectify this, properly balancing the pieces of my life – including where I call home.

I can look back on my 20-ish months in Nashville and see, very clearly, that there’s a plan in motion. There have been thrilling opportunities and serendipitous connections that make this all feel very God-sent. It was a weird, winding road to find home, but I’m so very glad to be here.

It’s time to change that.

As the final seconds ticked off the clock and the Predators won last week to reach the NHL’s Western Conference finals for the first time – and what a run it’s been! – I said that I had never loved anything as much as I love this city.

That’s something that’s been buried inside me since I was a kid. I’m so happy I’m here. I cannot wait to see what’s next.

This is Living Hope. 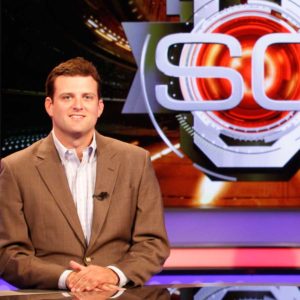 Travis Haney is a sports writer, author and storyteller. He has covered sports for both the South Carolina Gamecocks and Oklahoma Sooners and has contributed to ESPN and 247sports.com. He resides in Nashville, Tenn., with his weird, little, awesome Australian Shepherd, Kit. You can follow Travis’s journey at his website at travhaney.com.