I don’t love being a stepmom. I’ll just be honest and call it like it is. Being a stepmom is one of the most disempowered, negatively stereotyped and rarely discussed roles that 12% percent (or roughly 14 million) American women play.

Now, I do absolutely and unequivocally love my stepdaughter. Were that not true, playing this role would be impossible. But loving her and loving the role, I’ve learned with time, are two very separate things. It’s taken me even longer to get ok with acknowledging that truth inside myself, let alone naming it to others.

As a child of a blended family, I grew up familiar with the complexity and pain this backdrop can bring. Parenting and marriage are hard enough when everyone is “in love,” or at the very least, in alignment and agreement on how to raise kids and grow a family.

No one (apart from Hollywood) ever said that marriage or raising kids was going to be easy.

Now, try and imagine navigating that same scenario with someone who harbors significant hurt and anger toward you. What you get is not the most idyllic circumstances for compromise and collaboration.

I want to acknowledge, not all blended family dynamics are contentious. In fact, some of them work beautifully like healthy little ecosystems of growth and diversity. I both admire and envy those situations. These examples are the postmodern familial ideal.

Some blended families start out contentious and with lots of work and commitment arrive at a good place. While others, it would seem, are destined for conflict and resentment. Maybe it’s not so surprising that the blended family I’ve created as an adult mirrors much of the dysfunction that encumbered my own nuclear family as a child. There was a familiarity that drew me right into this web of complexity, and all the secret stories of blame and shame that resided there, just begging to be rewritten.

I can remember a feeling in the earliest stages of my relationship with my husband that was so inexplicably familiar. The (hopeless) romantic in me named this familiarity as some sort of prior life connection, a magical, metaphysical bond carried forward through space and time. A lovely notion, with possibly at least a kernel of truth.

Looking back now, I recognize that familiar part was the way in which the brokenness in my husband’s situation reflected the brokenness I saw between my parents. I see how some tender, naive part within me — that same part that wanted so desperately to make my parents happier — saw an opportunity to avail itself in a new paradigm. What I couldn’t fix before, I would absolutely fix now.

In my thoughts it sounded something like this: my open heartedness, coupled with all the work I’d done — these things would be my compass. Not only would I be able to navigate the landmine of other people’s hurt without it activating my own pain — even better — I would help everyone involved simply with the goodness of my intentions.

Yeah right is what I want to say looking back on that moment now!!! The craziest part is that some piece of me actually believed that logic added up.

This also means that I’ve struggled to be honest — like really, truly honest with myself or with others. The preoccupation with being good enough to make everyone around me feel better has left me at times almost entirely cut off from my own voice.

How could I speak my truth honestly, openly if it was something people wouldn’t want to hear?!  For that matter, why did I think I omnisciently knew what everyone else wanted?!

But then, life is full of these kind of assumptions and limiting beliefs. Dark little corners in the mind we back ourselves into and then can’t quite seem to figure our way out. It’s not all our fault. As I mentioned already, our culture doesn’t do a good job at depicting or valuing what is real, and the legitimate struggle required to arrive at peace.

Recently, I traveled to my hometown of Nashville for the first time in over a year with my son. Having been born eight weeks early after a tumultuous pregnancy and emergency C-section, we’d opted not to travel with him for a while, but instead to intentionally nest and try to catch our breath and our footing.

When my parents told me they were selling the family farm, something inside knew we couldn’t wait any longer. While Ezra (my son) is only a toddler and likely won’t remember this trip — I needed us to share that experience together.

There’s nothing quite like going home to put things in perspective. There was something subtlety and significantly different about this particular trip. I was still the same old me, but this time, far too preoccupied with wrangling a toddler to fixate on perfection which is it’s own kind of liberation.

I was also somehow new, different: I was a mom.

Not a stepmom, but like a real, actual mom. My son was at once his own being and also somehow an extension of me. Our connectedness required no explanation or disclaimer. It sounds like stating the obvious, I suppose. But as a stepparent, I’ve spent a lot of time and energy trying to explain things — why they’re complicated, why my stepdaughter and I didn’t automatically bond, how hard it’s been to make things good, how in some ways living this cycle again — while different — is also very reminiscent of the most painful parts in my own childhood.

My big aha came sitting in the screened in porch, watching fireflies, and chatting with an old friend. I made some off-handed comment. The words weren’t exactly right to describe the feeling, but they were the closest I could find.

“It feels different now, as a mom” I said.

“But you’ve been a mom now for years. Sure, it’s not the exact same, but it’s a huge role you’ve been playing without really or fully acknowledging it.”

Just like that — there were tears in my eyes and weight spilling off my heart. All this time, I’d been unwittingly getting stuck in that reminiscent part of my past. True to form and conditioning, I’d made my job of stepmom about everyone else’s needs and nothing about my own. I’d squelched my voice, or drowned it out by telling stories about the situation to make it sound better or easier than it actually was. When the honest to god truth of it — was that it sucked.

So now that I’ve mustered the courage and clarity to be really honest, let me tell you how it actually feels. It sucks to feel like you have to do just as much work, with less than half of the perks. It sucks to feel that you’re a convenient scapegoat in someone else’s unhappy ending. It sucks when you love a kid who’s directly and indirectly told she cannot love you back. It sucks when you can’t really do anything about it, apart from just show up to it over and over again regardless of how demoralizing or how abusive it feels.

Now this is not the story I’ve been telling over the years, at least not to most people. There’s far too much shame and a heavy hitting sense of failure in that version of the truth. So, instead, I’ve compartmentalized. I’ve placed all those shitty, out of control, hurtful feelings in a box. I’ve sealed them up and buried them in the far back of the closet. When new ones come, I add them to the box and shove it back in as far and fast as I can.

Because this has become modus operandi for coping, it has also left me only partially present in my life. I don’t think I had fully grasped that, until that that moment sitting on the porch with my friend. Suddenly I was aware of a feeling, an experience of myself — somehow lighter, less encumbered and less sad than I so often feel back in my current life in Portland.

That sadness has also made me want, at times, to run from a life and a family I actually really, deeply love. It makes me struggle some days to see myself as good. Instead I look through the lens of another’s pain, and that reflection is not pretty. What I see is a failure to make everyone else happy, and that feels all too reminiscent of my past. All these years, I’ve been taking it all on, and now I was doing it again. What I’m starting to see is that when taking it all on doesn’t work, I lash out at myself. All that other pain becomes my pain, my doubt, my shame. I start to see myself not through love, but judgement.

While this realization feels heavy and dark — it is also and absolutely a gift. From here, I’m able to see a clear path to setting myself free. That doesn’t mean the process will be easy, but it does mean that it is essential. What that requires is going into that far corner of the closet, getting out the box of sucky feelings and starting to be really honest about them. Not in a woah as me sort of way, but rather to be real, to be true. Because here’s the biggest thing, if I am one person with this box of secrets — then I am one of many. If we start talking truth together, I’m fairly certain our sad stories might just become songs.

This is Living Hope. 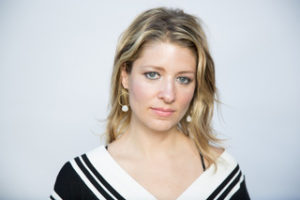 Micah Stover resides with her family in Portland, Oregon. She’s a coach, writer, mother, stepmother, philosopher and wife. She’s dedicated her life’s journey to the quest of knowing thyself. As a survivor of trauma and the child of a blended family, much of her work explores the relationship between adversity and resilience as well as the deep role that surrender and forgiveness play in giving rise to hope. When she’s not working or chasing babies, Micah enjoys reading, dancing and traveling. You can follow along with Micah’s journey at her blog: https://www.spiritsinsearchofsimplegoodness.com